After 10 years of advocating, organizing, and designing, Midway Peace Park is now under construction in St. Paul—and a celebration was very much in order!

Recently, the St. Paul Midway neighborhood hosted a party called “The Park is Coming” to celebrate this monumental community feature. It was also a chance to honor the efforts of all who helped make the dream of Midway Peace Park a reality—and many of those key collaborators were Skyline Tower residents.

From the very beginning, Skyline resident voices helped shape the development of the park. As Mayor Melvin Carter said at the event, 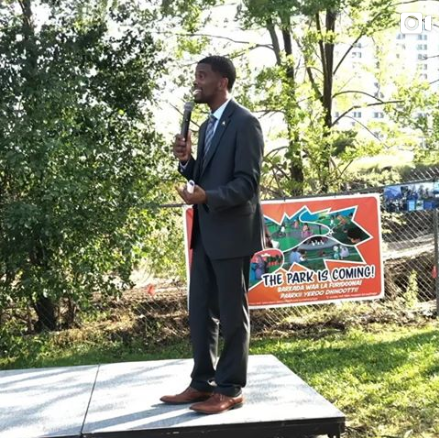 Every decision that’s ever been made, has been made to benefit the decision-makers. So if we want to set our city on a new course, it starts with expanding the number of people who are decision-makers. Back in 2011 as a City Council member, I got a chance to engage students at Gordon Parks High School. I got a chance, even back then, to engage residents at Skyline Tower, and neighbors all around our community and our district through City Council. And what we heard over, and over, and over again, is that we have all these families, people, parents, students here, and no park. And that that was something we ought to change.

Skyline residents of all ages became some of those key decision-makers—or perhaps more accurately, change-makers. They have been at the table the entire time, from planning to finally seeing the vision start coming to life.

Mangala Sharma, Individual Service Coordinator at Skyline, says, “This is the best example of community engagement. Skyline isn’t an isolated space, but truly part of the community. We’ve done something that will last forever. The park is a community fixture now for generations to come. There is more positive energy in the building, and residents want to be part of the community. We are St. Paul, and people really feel like their voices have been heard.” 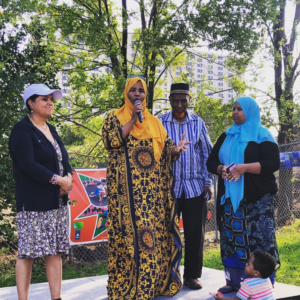 In addition to other community leaders, CommonBond residents, Khamar and Mohammed (pictured left), spoke at the Park is Coming Party, sharing their stories about seeing the park come to life and what this means for the Skyline community.

The groundbreaking of the park is about more than just a fun new neighborhood feature. Especially for Skyline residents, it presents opportunity for many outdoor activities that were previously inaccessible. While park space exists in St. Paul’s Midway area, much of it is private, geared toward very young children, or inaccessibly far away from Skyline Tower. The most notable and dangerous obstacle has been the nearby highway, Interstate 94, which separates Skyline from the nearest public park.

When complete, Midway Peace Park—less than one block from Skyline—will be a critical addition to the lives of so many in the community. It’s a place to enjoy the outdoors, to attend events, share a meal, watch children grow up, and truly build community among all people in the neighborhood.