If you’ve ever visited our Upper Post Veteran’s Community, you probably met Dutchess. A sweet, gentle Golden Retriever, she was known for seeking out individuals who might be stressed or anxious, and sitting on their feet to offer her soft head for a few pets. She was a loyal friend and therapy companion to her owner, CommonBond resident Austin, and a joy to see proudly walking beside him wherever he went. 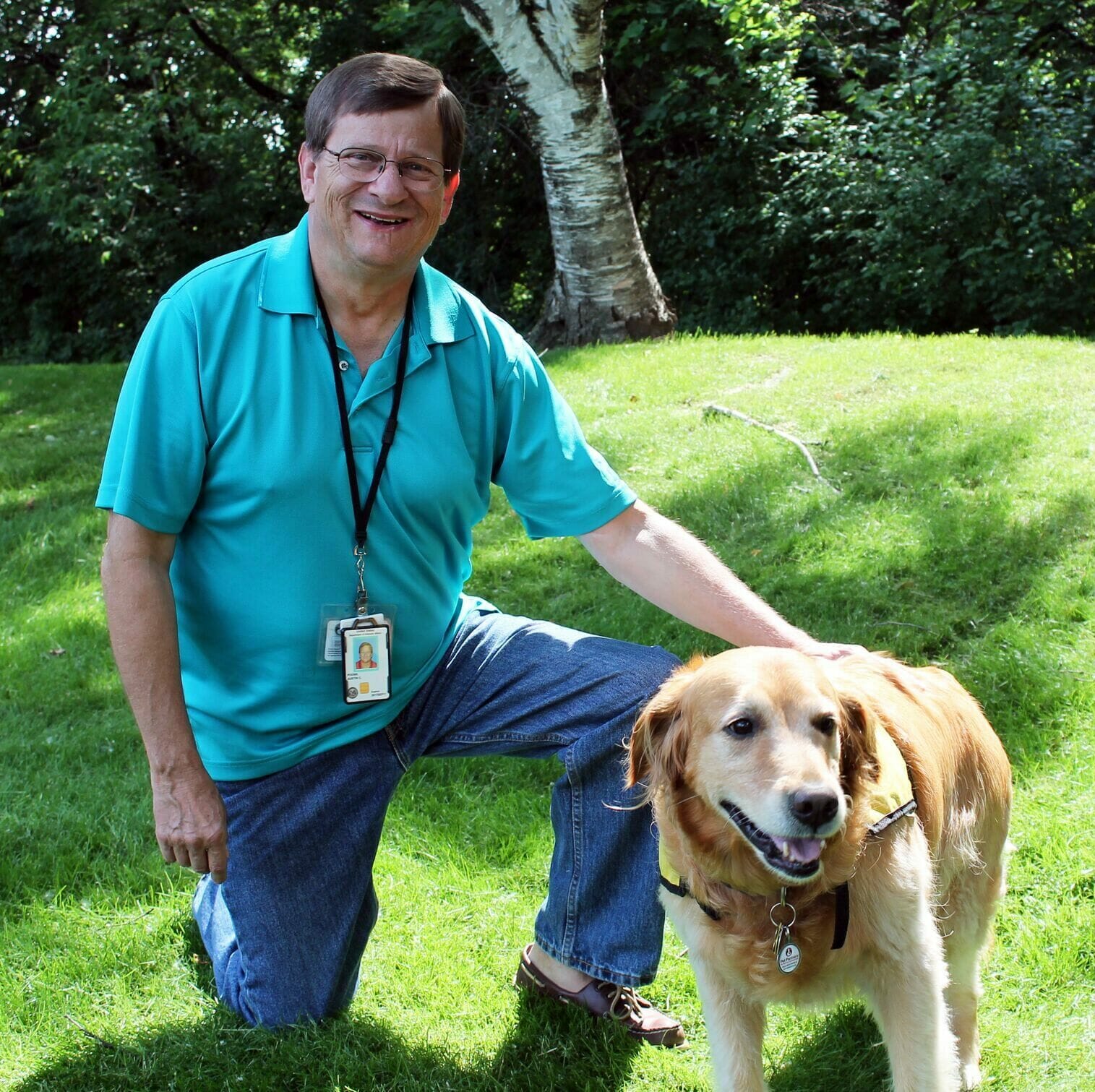 We were saddened to learn that Dutchess passed away in July at the very full age of 15. She was a beloved friend to all—CommonBond staff and the greater Twin Cities community, but especially to Austin. A veteran who served in Germany overseeing nuclear weapons during the Vietnam War, Austin found a special peace in Dutchess through her unconditional comfort and companionship. When the Great Recession hit, Austin was laid off and struggled to find work before finally having to give up his rented home in Minnetonka. For two years, Austin and Dutchess were displaced and homeless. But in 2015, the pair were among the first to move in to Upper Post Veterans Community.

Since then, Austin has given back to the community by taking Dutchess to visit VA hospitals to help counselors working with veterans who are depressed or suicidal, the health center at the University of Minnesota where students learn stress-reduction techniques, and the Hennepin County Medical Center to comfort dispatchers and emergency response teams. “She’s been trained to pick up on people who need attention,” he says. Any of the many people who had the fortune of meeting Dutchess will agree that the pair had a special bond, and Austin says that she rescued him as much as he rescued her.

But there’s more to this story—three weeks after Dutchess passed away, a grieving Austin received an email about a 9-year-old Goldendoodle named Wrolf. The dog had just become available at Range Regional Animal Rescue in Hibbing, MN. Austin was to be presented with a new therapy dog thanks to the leadership at Pet Haven and Mission Animal Hospital, so he alerted them to this potential new companion and began his three-hour drive north.

When he arrived at Range Rescue, the staff simply handed him Wrolf’s leash and charged an unusually low adoption fee. Austin then learned that on his drive, the staff at Pet Haven and Mission had called Range Rescue and told them his story. “They told them how I had just lost my therapy dog. They told them all the things that Dutchess and I did for the community, and how I would be a good owner for Wrolf.”

And that was that. Wrolf and Austin headed home to Upper Post, and they’ve been learning and bonding ever since. “He is huge and we already love each other. He is at my side most of the time,” Austin says. Austin feels especially grateful to Mission Animal Hospital for their support, as a recent routine medical procedure for Wrolf resulted in an unexpected surgical complication costing over $1,000, which the rescue covered entirely.

Now, all is well. “On Sunday, Wrolf stopped wearing the surgical cone on his head. We play and go for walks here at Fort Snelling every day,” Austin says. “He must have lived on a farm because he wasn't used to a leash, but I had full verbal control with him the day I got him.” And with that new connection came a wonderful surprise: “Unlike Dutchess, Wrolf loves to play fetch!”

We are so happy Austin and Wrolf found each other, especially after all the challenges of this year. No dog could ever replace Dutchess, but the start of a special new friendship is evident.

Austin and Duchess used to visit me at Bld 47 on the VA. I so loved her and she knew I always had a treat for her. So sorry to hear she crossed the Rainbow Bridge. Give my love to Austin and I'm so glad he has a new dog.

Saw this article while googling my name for no particularly good reason. Sweet. Nice to see another Wrolf in the world.

I really appreciate reading this beautiful, heart warming story of bonding and love. I've often thought some animals are like angels sent from above to help us. Dutchess, Wrolf and Austin are a real inspiration-sharing this love with others. Thank you for such faithful service...it's so needed. Sincerely, Diane Anderson