Then & Now: A conversation with Ed Flahavan

Former Catholic priest Ed Flahavan was instrumental in the founding of CommonBond Communities (CBC). Ed has always been deeply engaged in community; among other roles, he was a civil rights activist motivated by liberation theology, as well as a voter registration organizer. He observed once that he “never felt clearer about his purpose in life” than he did while mobilizing against racism and classism. As part of our 50th anniversary year celebration, we’re honored to share some of Ed’s memories around how CommonBond came to be—including some insight into the parallels between half a century ago and today.

CBC: You were there as CommonBond got started. Can you give us the short version of how CommonBond came to be?

Ed: Beginning in 1968 I was the executive director of the Archdiocese’s Office of Urban Affairs. It was around the time of the Plymouth Avenue riots, as well as Vatican II, which encouraged Catholic bishops to open up their doors and serve the people. After some consulting with community experts, an emphasis on affordable housing emerged. A small group was tasked with focusing on ‘doing something about poverty;’ providing housing became a focus of the new Urban Affairs Commission in 1968.

With the support of the new Archbishop, Leo Byrne, that group said, "Let’s do it, let’s create a package that basically said the Archdiocese ought to form a commission, separate from Catholic Charities, to get at root causes of some key social issues: legislation directed at the state legislature; advocacy; community organizing; adult education; and housing for those most in need"—and this particular issue eventually resulted in the creation of CommonBond.

CBC: And from there, the organization was formed? What did the earliest days look like?

Ed: CommonBond came about at the very first meeting of all the commissioners. It was 26 people around the table, in February of 1968. The new Archbishop said, “I’ve appointed all of you to be agents of change.” The federal government at that time was opening up extensively through the Department of Housing and Urban Development [HUD]. There was strong federal support for nonprofit sponsors to go into poor neighborhoods and try to address the lack of housing. This is where CommonBond Communities was seeded. 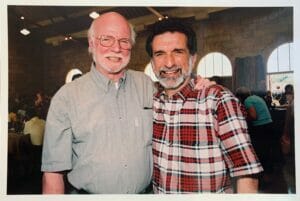 In the very early 1970s, I hired Joe Errigo to run CommonBond—and it was one of the best hires of my life. Joe came in, answering an ad in the newspaper. He was about 26 years old, smart and scrappy, working for the St. Paul Housing Authority. The first two CommonBond properties were in rural Minnesota: the groundbreakings for Greenvale Place in Northfield and Maple Hills in Red Wing took place in 1971. Both projects were in concert with the federal government. After that, we grew pretty quickly as an organization.

CBC: Why was housing the means through which the founders chose to make change?

Ed: It was one of the fundamental issues they judged could transform communities. Housing is foundational, in all senses of that word. And there needed to be housing options that were affordable for all—especially people in our community with the lowest incomes.

The founders believed everyone had a right to live in a place of their own. Fifty years later, I believe that is still a critical part of CommonBond’s mission. 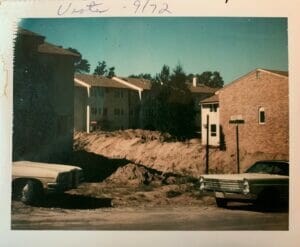 CBC: We understand you have firsthand experience being a CommonBond resident!

Ed: Yes, I lived for about three years at Vista Village on Concord Street on St. Paul’s West Side. My income qualified me to live there. And I must say being there was absolutely wonderful. My one-bedroom apartment—with mostly Hispanic grandmas for neighbors—was a delight. I would sit in the evening on the balcony watching lots of kids playing in the parking lot below.

CBC: How are the challenges we face today different or similar to what you faced in the late 1960s and early 1970s?

Ed: There are certain dates in history, like 1968, that are incredibly significant because there’s an enormous upheaval going on—even if it’s been somewhat gradual or building for years. I remember the intensity of that time: the Civil Rights movement, the assassination of Dr. Martin Luther King as well as Robert Kennedy, demonstrations against the Vietnam War breaking out all over, and violence against college students protesting the war. And, we had a president [Lyndon Johnson] who was paying so much attention to Vietnam that he couldn’t seem to focus on the poverty and racial issues here at home.

As a priest, another big part of the 1960s for me was Pope John XXIII in Rome. He opened the doors to Vatican Council II and pushed in the direction of getting out of the church sacristy and into the streets of our own communities—which for me was tied to my three-year assignment in the mid-1960s to St. Peter Claver Church. I was very aware of being a white priest at that mostly Black parish in St. Paul. And I will say, I re-learned American history, life, and experience through Black eyes in St. Paul. And not just the stuff happening on a national level, but local discrimination, too. My world, my life, felt totally different after that.

As a white priest, I was fired up about what had happened at the Vatican Council and what was going on in our communities, and how it turned our sails collectively into the problems. It was a significant chapter in my life and helped set the course of my life’s work and thereafter. And things are coming around again today.

I would say that 50 years out from the creation of the first properties in Red Wing and Northfield in 1971, CommonBond is increasingly called to respond to the deeply divided social, racial, and economic problems of today—to build common bonds of community. In the explosive ripple effects of last year’s murder of George Floyd, we can do no less.

I am so touch about reading your story. Thank you so much what you have contributed in the community for the program. If i may i also would like to say that i tried to sign up into the program, because i need my own place. I have limited income i will continue to try . Thank you....M.P.

I am so proud to hear and see you. It fills me with hope for the future. I deeply admire and thank God that they are on our former property. I go for a therapeutic walk each day and as I walk by bless them with my special blessing and hope for the future. If I ever get to retire I hope to volunteer over there. United in prayer and deep gratitude for knowing you and sharing your gratitude for God's Blessings on your life and Common Bond. Sister Paula Hagen

I see housing as key also. I've started a lot later in'68 I was just getting married and having babies. But now with blessing of love of my deceased husband I own the. Rye House and am working with Zach Johnson national director of Call to Action to renew and revive Rye House not simply as a hospitality house but as a home base for five CTA young people who. would form an intentional community. and have Rye House as their home base. I am meeting with the board of CTA a week from tomorrow and I ask your prayers and concern channeled in our direction. So far it has been a Covid Blessing to have two wonderful helpers to work at the house a couple days a week,, mostly sorting and filing and painting and getting new rugs for the upstairs. Our goal is April 1 to sign an agreement on ownership of the house. Then also we need Spirit direction to hire a house. manager who can keep the logistics helpful and also be a resource to the house. Thank you for all the blessings you have help to bring to Minneapolis. I live in York Coop right across from a Common Bond community. My next dream is to have our 371 residents reach. out across the street and have a pot luck to help us know that multicultural and have person to person contact with them. Greetings to your wonderful wife. In peace, Barb Sadler