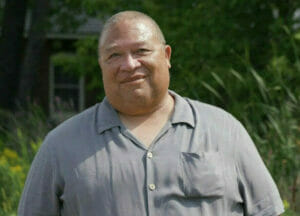 My name is George (you might have seen my video recently), and I’ve been a resident at Upper Post Veterans Community for about five years. As the end of the year gets closer, I’m sharing my story because I know how important it is for places like this to exist, and I also know that it takes the support of many to make it happen.

I hope you’ll think about supporting CommonBond’s mission because I can tell you that a home really is the foundation for everything else. When I moved in, I honestly didn’t know what I was getting into. At that time, I was just excited about not being homeless. Now, years later, I can’t imagine where I’d be without this community.

I was in the military—a veteran of the United States Army. As a weapons support radar repairman, I had taken classes and learned so much about military weaponry and electronics, shaping what I hoped my future career would be. But then when I got out, the world waiting for me wasn’t as full of opportunity as I thought.

It was a cyclical downfall. I had wanted to get a job in electronics when I got out, or maybe fly airplanes—my experience had been a great fit for those paths. But I lacked the formal education to pursue them—physics credits, in particular. And because I desperately needed a job, I couldn’t afford the time and money it would take to go after that education. I felt like I was constantly between a rock and a hard place, and after years of just trying to make it, I went under. I was laid off from my factory job and couldn’t pay rent, and after that I was homeless. It really shuts you off from the world. You just want to live a meaningful life, but that’s hard to do when all you can think about is your next move day to day. I bounced around from different places where they’d supply a bed, and eventually, I was approached about a program that was going to be offered for people like me—veterans who were homeless. 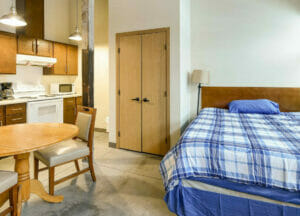 I gave them my name and hoped for the best. A few months later, I got a call from someone saying that I was selected. It sounded great, but like I said, I had no idea what I was getting into. Once I moved in, it was an eye opener. I was told I didn’t need to bring any furniture or household things, because they would supply everything. And when I walked in and saw my place with a brand new bed, that was really special.

To me, Upper Post offers a whole new acceptance of military individuals. There’s so much need for a place like this. It’s helping men and women totally get back on their feet, offering a way into their own goals and encouraging them to give back to the community. And, the community here is especially unique because even though our military experiences were all different, there’s a level of understanding and camaraderie you just don’t usually find.

When you get out of the military, there’s not much you can really talk about with other people. You can try, but they won’t understand. It’s a job and you want to do it well, same as everyone else. But with the military, it’s a job where you could lose your life. And the people who have become family around you could lose their lives. The stakes are different, and other people just won’t get that. But here, they do. For whatever road the residents took to get here, most just needed tools that weren’t there for them—whether that was to get more education, find psychological help, get a job, etc. Here, you can understand one another and support each other. It’s a good feeling having that around you, and it can be really healing. 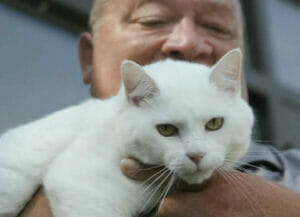 My life before and after Upper Post is like night and day. Since I’ve been here, I’ve started reading about history as a way to understand the world today. I’m not as angry as I used to be. I’m reconnecting with my brother and sisters after many years. I got a cat named Bravo, who I like to take on walks outside. I can talk with Zach (our services coordinator) about life and beat him in a game of pool now and again.

I know with certainty that Upper Post has offered support, community, and peace to so many people. And I also know that there are many people who won’t get the chance that I did. If you can, please continue to support CommonBond, because with a home and some help, so much opportunity opens up. Especially now, it’s never been more important to be able to be home and safe.