Midway Peace Park is officially open after two years of construction, and a decade of advocacy and planning! 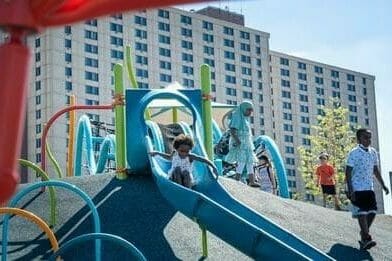 Once a couple vacant yards and a crumbling parking lot, the space has now officially opened to the public as a beautiful park with a playground, community gathering areas, and green space. It's a much-needed and hard-won addition to the Midway neighborhood—one that not only creates a beautiful new space, but that stands as a lasting symbol of the community effort it took to bring this vision to life.

Many of the key advocates that helped bring Midway Peace Park into existence are residents of Skyline Tower, a CommonBond community just across the street from the park. Residents of all ages were involved throughout the whole process—writing to city officials in the very beginning, sitting on the Design Advisory Committee, painting park benches, and rallying together each day to ensure the voices of their community were heard. 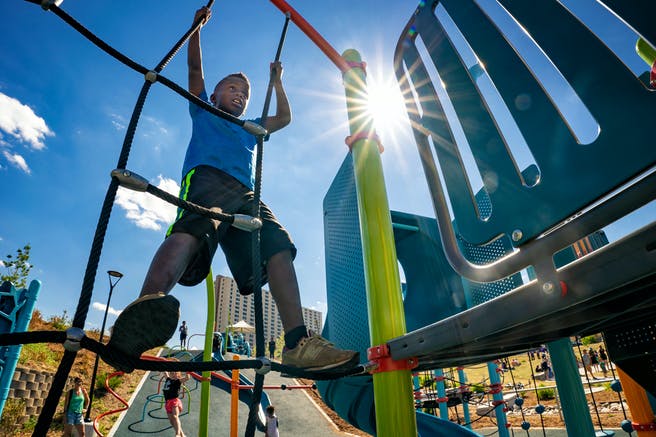 Before the opening of Midway Peace Park, there were very few options for outdoor space: much of it was private, geared toward very young children, or inaccessibly far from Skyline Tower. The most notable and dangerous obstacle has been the nearby highway, Interstate 94, which separated Skyline from the nearest public park. Now, residents only have to cross the street to access a beautiful space they had a huge hand in creating.

Mangala Sharma, Advantage Services Coordinator at Skyline, said it best: "This was definitely a huge community project—not from the top down, but from the bottom up."

We encourage you to read more about Midway Peace Park and the community's involvement in the Star Tribune article below (and go check out the park for yourself!):
St. Paul's newest park was a community effort - by James Walsh